- Treatment of Polydactyly Subtypes:
- the general surgical goal is to excise the toe which provides the toe with the most normal contour, inorder to facilitate shoe wear;
- usually this involves excision of the most medial or the most lateral toe,  depending on whether the deformity is pre or post axial;
- surgical timing: most authors recommend surgery after 1 year (to reduce anesthetic risks but prior to walking age, if possible;
- this allows the greatest potential for remodeling;
- often patients will be refered in at age 4-5 years because of difficulty w/ shoe wear;
- post-axial polydacyly:
- accounts for about 80% of foot polydacyly cases;
- phalangeal duplication w/ block metatarsal or wide metatarsal head is the most common pattern;
- following in frequency are the "Y" shaped metatarsal, "T" shaped metatarsal, and finally the metatarsal duplication (complete or
partial);
- over 90% of patients should have a good to excellent surgical result;
- surgical resection involves excision of the lateral toe in the majority of cases;
- if the metatarsal head is prominent, it should be trimmed flush to the metatarsal shaft (at right angles to the physis);
- leaving the metatarsal head prominent may cause a painful postop bunion;
- transecting at right angles to the physis does not cause growth deformity;
- the metatarsal bowing which results from excision of a "Y" metatarsal will usually remodel over several years;
- the joint capsule should be carefully repaired;
- if the inner toe is significantly hyplastic, then it should be excised instead, inorder to preserve the contour of the forefoot;
- as with central duplications, it is important to reapproximate the intermetarsal ligament;
- post operative complications:
- the lateral digit often shows a valgus deformity at the MTP joint, but this is usually asymptomatic and does not interfere w/ shoeware;
- bowing of the lateral metatarsal shaft is common, but this may resolve w/ subsequent remodeling;
- misc:
- floppy digit:
- it has become a standard practice to suture ligate supranumerary digits which are attached only by soft tissue in the hopital nursery;
- suture ligature of supranumerary digits w/ reidual cartilage and/or an underlying duplicated metatarsal will lead to future deformity;
- radiographs should always be taken to ensure that there are no underlying deformed metatarsals, in which case the
supra-numerary digit should be surgically excised at one year; 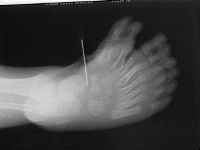 - central duplication:
- accounts for about 3-6% of foot polydacyly cases;
- these most often occur as hypoplastic metatarsal ray duplications;
- patients often have a widened forefoot (splayed) which is often cannot be corrected w/
surgical removal of the duplicated digits;
- this results from laxity of the intermetatarsal ligament;
- surgery involves removing the central ray duplications w/ a racket incision at the base of the
duplication;
- the toe is excised, and the intermetatarsal ligament is reapproximated;
- post operative casting may help keep the forefoot from splaying while the intermetatarsal ligament heals;
- note that gaps left between toes often will not narrow w/ time;
- pre-axial polydactyly
- accounts for about 15-17% of foot polydacyly cases;
- msot common pattern is phalangeal duplication w/ block metatarsal;
- note that short short "block shaped" metatarsals are most associated w/ hallux varus deformity which is associated w/ pain and
difficulty w/ shoe wear;
- often patients w/ short metatarsals w/ have transfer metatarsalgia;
- these block metatarsals will alway remain abnormal;
- excision of medial toe:
- disarticulation of the duplicated hallux is followed by careful reattachment of the abductor and adductor hallucis;
- in some cases, the abductor will have to be lengthed before reattachment;
- the adductor can be inserted into the great MTP capsule;
- pin fixation can be used to hold the phalanx in an anatomic position, inorder to avoid a postoperative hallux varus deformity;
- if the metatarsal head is prominent, it should be trimmed flush to the metatarsal shaft (at right angles to the physis);
- leaving the metatarsal head prominent may cause a painful postop bunion;
- transecting at right angles to the physis does not cause growth deformity;
- the metatarsal bowing which results from excision of a "Y" metatarsal will usually remodel over several years;
- the joint capsule should be carefully repaired;
- postoperative complications:
- often patients are dis-satisfied following surgery because of a progressive hallux varus deformity;
- any amount of varus is considered abnormal, and the patient's symptoms often correlate w/ the degree of varus;
- patient's often note difficulty w/ shoe wear and pain;
- if hallux varus deformity is present, then consider an AFO which is molded to prevent forefoot varus;
- modified farmer's procedure:
- indicated for a duplicated but hypoplastic second toe;
- involves removal of the second toe;
- a rectangular rotational skin flap is made in the web space;
- starting at the proximal aspect of the medial skin flap incision, an additional incision is made across the medial aspect of the great
toe MPT joint;
- the great toe is then lateralized and is partially syndactylize to the third toe (note that the 2nd toe has been removed);
- complete syndactyly may pull the lesser toes into varus;
- reinsert the adductor hallucis, inorder to avoid hallux varus deformity;
- the rectangular skin flap is then rotated medially to cover the defect created by rotation of the great toe;
- case examples:


Polydactyly of the foot.

Polydactyly and Polysyndactyly of the Fifth Toe.

Treatment of Preaxial polydactyly of the Foot.

Problems in polydactyly of the foot.