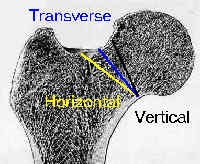 - Misc:
- single ramus fracture is commonly seen in elderly age groups, in whom falls are common;
- in this age group its important to make important distinction between frx of pelvis & undisplaced or impacted frx of neck of femur;
- finding tenderness over the pubic bone may make diagnosis apparent

Vertical shear fractures of the femoral neck. A biomechanical study