- Patient Position:
- ensure that patient has not rotated anteriorly, for this may allow acetabular component to be placed in retroverted position;
- ensure that patient's torso is not tilted inferiorly (as can occur from a bean bag), as this can cause reaming in an
excessive verticle position; 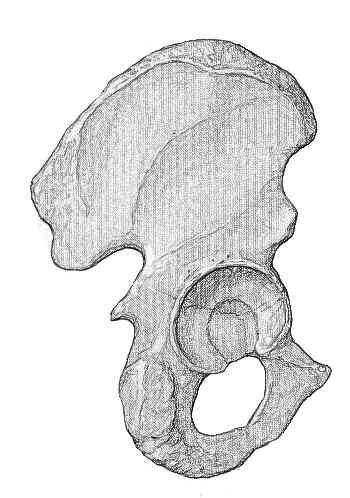 - an unobstructed view of the acetabulum is manditory;
- ensure that femur is retracted anteriorly to allow passage of reamers;
- if femur is inadequately retracted anteriorly, then it may force reamers posteriorly, and excessive
reaming of posterior column will occur;
- carefully dissect the transverse acetabular ligament from its bony attachments anteriorly & post
- keep the blade superfical, to avoid brances of obturator artery, which pass beneath it; - Identification of Acetabular Floor - Reaming Direction:
- component anteversion, adult femoral and acetabular anteversion, component insertion,
and component position);
- superior wall of the acetabulum is a slope that must be converted to a hemisphere;
- reaming is directed more against the medial and posterior wall than towards the acetabular roof;
- need to avoid plowing into the superior rim as larger reamers are used;
- goal is to avoid translating the center of rotation laterally or superiorly;
- usual goal is 20-30 deg of anteversion and 35-45 deg of abduction;
- w/ pt in lateral recumbent position after incision is made, one finger is placed in sciatic notch & one finger on
anterior superior spine;
- w/ methylene blue, line is drawn on drapes between these 2 points;
- one line was drawn between sciatic notch & anterior spine on the drapes and a 2nd orthogonal line was drawn and
flexed an additional 10 degrees;
- w/ osteoarthritis: reaming is directed more centrally rather than peripherally;
- protrusio:
- in severe acetabular protrusio reaming procedure is more aggressive and is directed peripherally and not centrally;
- therefore larger reamers and a larger cup is used;
- Reaming Depth:
- remember that the goal is to obtain near complete coverage of the acetabular component;
- initial medialization:
- central portion of acetabulum requires more reaming than periphery;
- to avoid superior placement of acetabular component, initial reaming is directed more medially;
- use true floor of acetabulum as marker for depth of reaming;
- reaming to depth that obliterates this U shaped portion of acetabulum (fovea) usually converts the bony acetabulum to
hemisphere;
- note that the fovea is often located posteriorly:
- hence initial medialization must be dead center rather than centered over the fovea;
- if initial medialization reaming is started too posteriorly, then subsequent reaming will follow a posterior path and may
ream out posterior wall;
- initial reaming is done w/ instrument about 9 mm smaller than templated size;
- as reaming nears floor of acetabulum, the subchondral bone will start to break up exposing cacellous bone;
- take care not to penetrate the medial wall, unless controlled penetration is necessary to obtain sufficient cup
coverage (medial protrusio tech);
- references:
- Benefit of Cup Medialization in Total Hip Arthroplasty is Associated With Femoral Anatomy
- Restoration of the centre of rotation in primary total hip arthroplasty
- cautions:
- if more bone must be removed from inferior margin of acetabulum, note occurance of significant bleeding
from obturator artery;
- dense sclerotic bone in one region of acetabulum may result in eccentric reamining and eccentric cup placement;
- a smaller reamer useful to remove small portions of sclerotic bone which is causing a malposition of the reamer;
- excess bone in inferior margin of acetabulum may later cause head of femoral component to become levered out of cup
superiorly during adduction;

- peripheral reaming:
- initial use of a large reamer can destroy the superior rim, necessitating a bone graft for adequate coverage;
- hence sequentially larger reamers are used to effect a controlled and centralized expansion of the acetabulum;
- w/ use of progressively larger reamers, one may find that transverse acetabular ligament is hypertrophic and must be excised to
allow larger reamers to enter acetabulum;
- elimination of sloped roof of acetabulum;
- larger reamers are inclined firmly under the superior aspect of acetabular rim to ream the bone to a hemisphere from its
normal sloped anatomy;
- careful not to remove bone from the superior rim at this step;
- when reaming the "sloped roof", the reamer should not engage the superior acetabular rim (because the reamer is engaging
the more medial roof instead);
- once the reamer begins to engage the superior rim, theoretically the roof is now a hemisphere;
- this step is especially important when under-reaming by 2 mm because failure to contour the flattened roof of the
acetabulum will result in incomplete seating of the acetabular component; (consideration for oversized components:)
- cautions:
- take care w/ use of a larger reamers as these can destroy superior rim, necessitating a bone graft for adequate coverage;
- surgeons gloved hand nearest to reamer exerts downward pressure (vector) so that the reamer does not skive upward;
- need to avoid damage to the posterior column w/ progressively larger reamers;
- w/ excessive anterversion the reamer will be directed into the posterior column and will "skive off" the anterior column;
- keep a slight anterior directed force on reamer so that it equally reams surfaces of anterior and posterior acetabulum;
- reaming subchondral bone:
- avoid reaming through the entire subchondral bone since this provides significant structural support;
- try to preserve subchondral bone, esp in superior aspect & periphery of acetabulum, but deepening acetabulum to obtain full
seating of cup in bone takes precedence over preserving subchondral bone;
- final reamer:
- final reamer size is determined by complete contact between the reamer and the acetabular rim;
- ensure creation of complete hemisphere:
- reamer 2 mm less than the intended cup size needs to be reamed 2-3 mm deeper than the peripheral edge of acetabulum;
- this helps ensure that the acetabulum is deep enough to fully encompass the cup;
- ensure that this reamer does not ream out the superior rim;
- consideration for oversized components:
- assess quality of subchondral bone:
- sclerotic bone circumferentially intact;
- dense subchondral osseous surface which is underreamed may not allow the acetabulum to expand around the cup;
- w/ hard sclerotic bone which is circumferentially intact around acetabulum, then 2 mm underreaming may not allow
proper seating of cup;
- reamer 1 mm less than intended cup size needs to be reamed 1-2 mm deeper than the peripheral edge of aceatabulum;
- this may partially disrupt ring of hard (inflexible) circumferential subchondral bone which will allow proper expansion
of the acetabulum around the cup as it is being inserted;
- careful not to ream out the acetabular roof;
- soft bone, subchondral bone partially reamed, no circumfertential sclertic bone:
- consider underreaming by 2mm, or press the 1 mm undersized reamer without reaming or with minimal reaming;
- when under reaming by 1 mm or with soft bone, use the last reamers in reverse in order to expand the acetabulum (and
compacting the underlying bone) w/o removing bone stock;
- consider prothesis with screws;

- references:
- The case for removing the subchondral bone plate in preparation of the acetabulum
- The value of preoperative planning for total hip arthroplasty.

- Trial Shells: (acetabular component position)
- reaming is complete when all cartilage has been removed, reamers have cut bone out to periphery of acetabulum, and
hemispheric shape has been produced;
- trial shell that was either the same size as the final reamer or one size bigger is then inserted (depending on surgeon's goals);
- note final position of the shell in relation to the anterior and posterior walls (ie acetabular component position)
- look through the windows of the shell to make sure that there is a true deepened hemisphere (ensure that the superior roof is not
flattened or underreamed) which can block the compoent from fully seating;
- consideration for oversized components:
- trial prosthesis is placed & evaluated for fit;
- if this trial shell can be buried down to its base with hand pressure, then next larger size of trial shell is inserted;
- optimal trial size will not "bottom out" with gentle tapping of the mallet;
- final preparation:
- after trial placement, acetabulum is further prepared by removing any remaining soft tissue & clearing out bone cysts;
- fill cysts with reamed bone graft and apply reamer in reverse to help impact the graft;

- Component Insertion:
- acetabular component position
- consideration for oversized components
- Case Example:
- 35-year-old male w/ near anklyosed hip following a GSW to the hip;
- preoperative films appeared to indicate that little or no medialization was necessary;
- postoperative films, however, indicate that the cup was lateralized (hence, reaming was inadequate)

Position, orientation and component interaction in dislocation of the total hip prosthesis.

[Cementless socket fixation based on the "press-fit" concept in total hip joint arthroplasty].