1) Reduction of Post Op Surgical Bleeding. Why is this important?

"Patients who return to the operating room within thirty days after the index TKA for
evacuation of a postoperative hematoma are at significantly increased risk  for the
development of deep infection and/or undergoing subsequent major surgery. These
results support all efforts to minimize the risk of postoperative hematoma formation."

* Study from 2013, that fibrinolysis (ie. bleeding) peaked 6 hours after end of surgery and maintained about 18 hours after
surgery, as evidenced by an increase in D-dimers.
* concluded that effective use of TXA needs to extend to 18 hours to be effective.
* study did not take into account the need for lovenox or xarelto
* by parallel reasoning, any attempts to reduce postoperative bleeding needs to extend at least to 18 hours and possibly beyond.

3) What has been the traditional gold standard to adress postoperative bleeding? 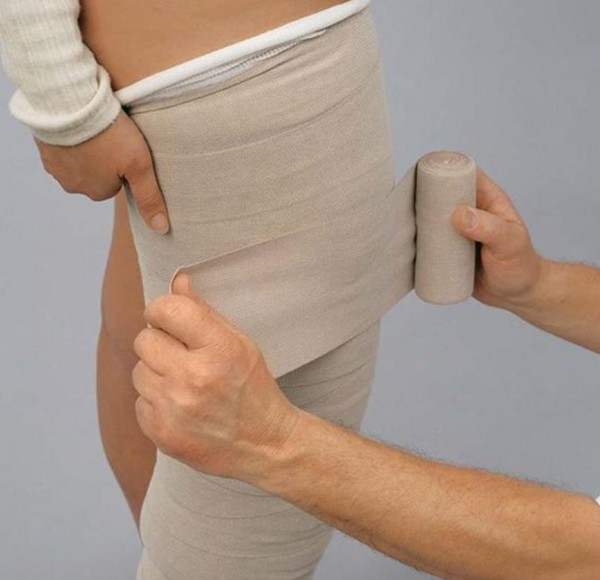 * For the Duke trained surgeons in the 1990s, the gold standard was the application of
acewrap compression dressings for knee and hip replacements (shoulder replacements
were less common).
* the more bleeding meant the application of more ace wraps.
* even though these dressings did stop bleeding, there was a high patient dissatsifaction rate
* TKR patients would complain of:
- excessive dressing tightness
- difficult with PT (unable to bend knee)
- blistering from shear against the ace wraps with CPM and PT ROM
- unacceptable discomfort from resultant foot and ankle swelling
- unable to assess blood on the dressng (one indicator of bleeding)
* THR patients:
- extreme difficulty for the doctors and nurses to apply these dressings
- basically have to have the patient standing up with legs spread while
leaning forward with a walker
- humiliating

- same complaints as with TKR patients (too tight and ankle swelling)
- usually contaminated with urine and stool at the upper edges after a day or two.
- occurance of deep decubitus ulcers in the groin region
- unable to assess blood on the dressng (one indicator of bleeding)
* TSR patients:
- spica compression dressings (across the shoulder) are rarely applied.
- extreme difficult in keeping the dressing in place
- same complaints as seen in the TKR and THR patients.
- can't assess the wound for bleeding.
* compression dressings seem to "Rob Peter to pay Paul."
- good for the incision but bad for the surrounding tissues. 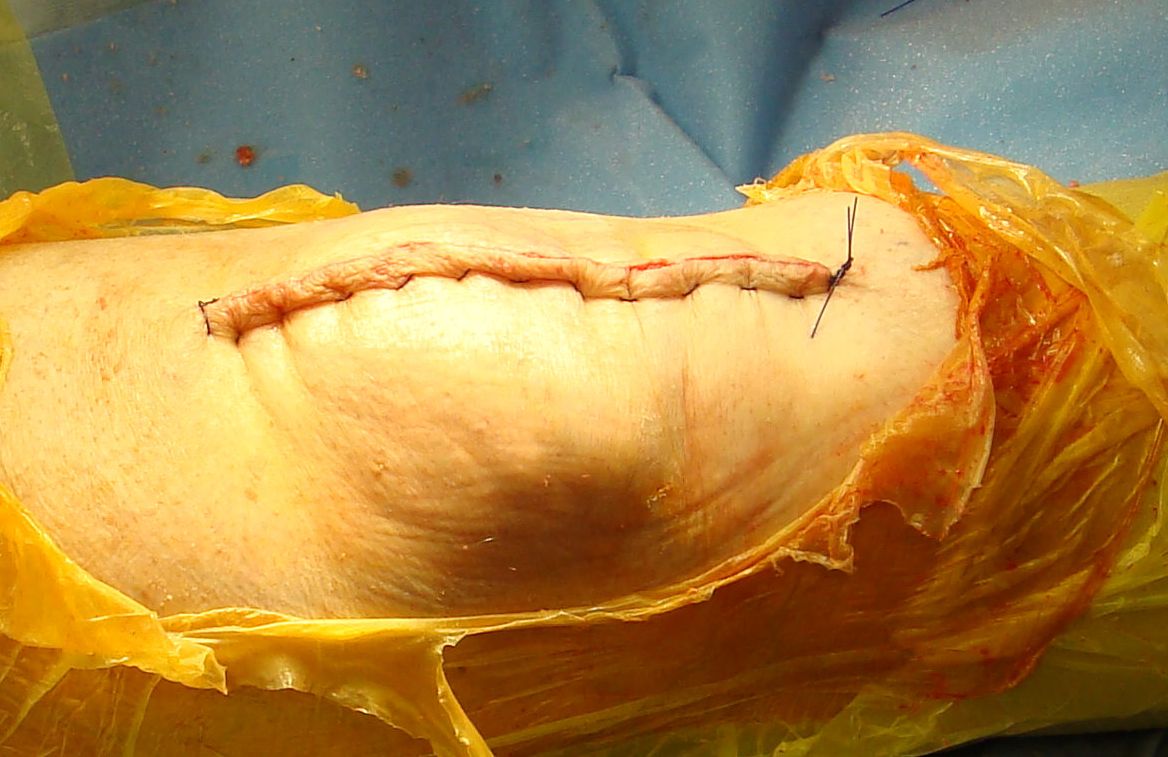 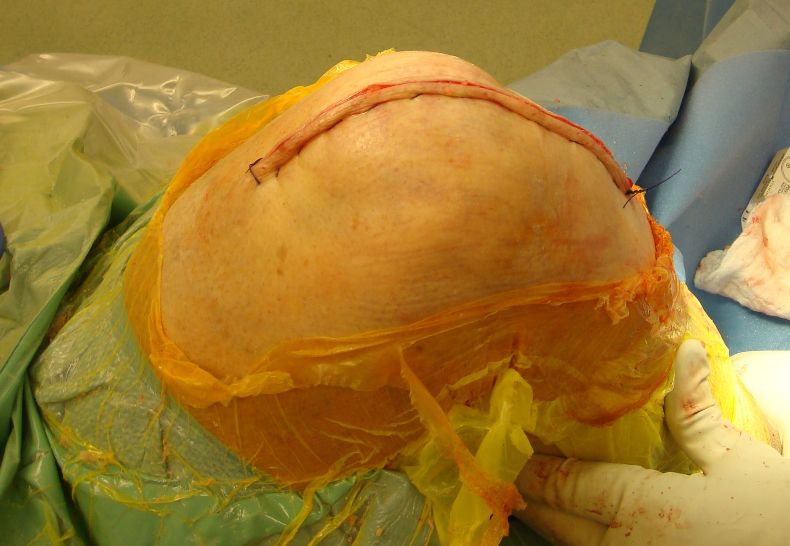 4) What is the value of negative compression dressings and what are the options?

* without going into detail, the negative compression dressings have been shown to be
extremely effective in assisting postoperative incisional healing in countless peer
reviewed joutnal articles - with esstenially no safey issues in general orthopaedics.
- use in spine, vascular surgery (over blood vessels), abdominal surgery are another issue.
* most of the basic science work was done in the late 1990s by Morykwas and co-workers
* most of the reported literature regarding negative pressure dressings is clinical and it is
largely assumed that the basic science principles are similar.
- obviously there is no open wound bed to induce granulation tissue
- the compression / compaction of the dressing causes the skin, subQ tissue, and muscle on
either side of the incision to come together in firm - even opposition.
- downward compression of of the dressing with negative pressure has a similar effect as
a compression dressing - without the negative side effects.
* Commericial Options:
- Prevena™ Incision Management System
- was available at Duke Raleigh, but dropped due to cost (480 dollars)
- provena (KCI) uses 125 mmHg of pressure based on the orginal wound vac research (open wounds).
- endless supply of clinical trials:
Negative pressure wound therapy to prevent seromas and treat surgical incisions after total hip arthroplasty
Incisional negative pressure wound therapy after hemiarthroplasty for femoral neck fractures - reduction of wound complications.
Negative pressure therapy is associated with resolution of incisional drainage in most wounds after hip arthroplasty.
- PICO Closed Suction Dressing:
- currently available and the cost is about 180 dollars.
- pico uses 80 mmHg of pressure which last for 7 days.
- adhesive dressing is more flexible than tegaderm
- probably best for TKR patients which require constant motion: reduced blister formation.
- remember there are 4-5 TKR patients for every THR (the later do not require constant
motion (CPM), but can bleed more.
- endless supply of clinical studies;
- negatives: the negative 80 mmHg of pressure is not enough to control bleeding in many cases.
- bleeding and repeated dressing changes are risk factors for infection (JBJS 2009 Jan;91(1):48-54.)
- painful for the patient and requires use of valuable nursing time.

* Off the Shelf Options Using Wall Suction:
- when it comes to protecting our patients, we need to protect our rights to use clinical reasoning or
otherwise the commercial corporations and government will take them
- in a recent review of negative pressure dressings:
A total of 24 studies found to match the study inclusion criteria, 22 were considered to favor a
particular system (the other two were categorized as impartial).
Of the 24 studies, 19 had some form of manufacturer involvement.
Of the 19 that had some form of manufacturer involvement, 18 had outcomes that were deemed
beneficial to the involved manufacturer, whereas one was deemed to have an impartial outcome.
This study suggests that manufacturer involvement in these studies (regardless of level) correlates
with the outcomes being beneficial to the involved manufacturer in almost all cases.
- The influence manufacturers have on negative-pressure wound therapy research.
Plast Reconstr Surg. 2014 May;133(5):1178-83

- at least 19 clinical references including at least 3 clinical trials (off the shelf vs. commercial) indicating safety and
similar clinical efficacy:
- as an example from the University of Chicago:
A prospective randomized trial comparing subatmospheric wound therapy with a sealed gauze dressing and the
standard vacuum-assisted closure device. (Ann Plast Surg. 2012 Jul;69(1):79-84)
- A randomized prospective study of 87 patients (N = 45 in the GSUC arm and N = 42 in the VAC arm) was
undertaken between October 2006 and May 2008. The study comprised patients with acute wounds resulting
from trauma, dehiscence, or surgery.
- RESULTS: (off the shelf gauze using wall suction was just as good as the KCI provena)

The authors report a randomized controlled trial comparing the efficacy of the GSUC vs the VAC in securing STSG.
A prospective, randomized, controlled trial was conducted in 157 wounds in 104 patients requiring STSG from August
2009 to July 2012. All wounds were randomized to VAC or GSUC treatment and assessed for skin graft adherence/take.
At postoperative day 4 or 5, NPWT was discontinued, and the size of the graft and any nonadherent areas were measured
and recorded. Concomitant comorbidities, wound location, etiology, study failures, and reoperative rates were also
reviewed. In all, 77 and 80 wounds were randomized to the GSUC and VAC study arms. Patient demographics were
similar between both groups in terms of age, sex, comorbidities, etiology, and wound location. In all, 64 of 80 wounds in
the GSUC group and 60 of 77 wounds in the VAC group had full take of the skin graft by postoperative day 4 or 5 (P =
.80). The mean percent take in the GSUC group was 96.12% vs 96.21% in the VAC arm (P = .98). The use of NPWT in
securing STSG is a useful method to promote adherence and healing. This study demonstrates that a low-cost, readily
accessible system utilizing gauze dressings and wall suction (GSUC) results in comparable skin graft take in comparison
to the VAC device
Prospective randomized controlled trial comparing two methods of securing skin grafts using negative pressure wound
therapy: vacuum-assisted closure and gauze suction. J Burn Care Res.  2015 Mar-Apr;36(2):324-8.

* Rational conclusions regarding use of Wall Suction and Off the Shelf Dressings:

1) for straight forward orthopaedic procedures (where the dressing is not over blood vessels or nerves), use of wall suction is safe.
2) off the shelf dressings are applied using aseptic technique, but it is understood that wall suction connections are not sterile
- neither are the provena nor pico suction units after they are handled
- back in the day, the standard was guaze and silk tape (the guaze was sterile but the tape was certainly not - usually dirty)
- the main risk of infection is bleeding and the need to repeatedly change the dressings in the early post op period.
3) off the shelf negative pressure dressings have been used at Duke Raliegh and have been shown to be safe.
- closed suction dressings that team Wheeless has used since 2007 have been set at 150 mm of pressure and are
only prone to blister formation if CPM is used.
- higher pressure allows for more internal collapse and compression of the dead space and less bleeding.
- main need is to keep appropriate pressure until there is no increase in bleeding on the dressing.
- once the bleeding has ceased the "conventional settings can be used" (the PICO unit is connected to the PICO tubing)
- Duration of postoperative fibrinolysis after total hip or knee replacement: a laboratory follow-up study.

- References for Off the Shelf Negative Pressure Dressings (gauze and wall suction):

Morykwas and co-workers defined various parameters in the application of NPWT that remain the standard today.
They utilized a porcine model and examined the effects of pressure and intermittent cycles versus constant pressure on blood flow,
granulation tissue formation, bacterial load and skin flap survival.

This recommendation was based on the original work by Morykwas and colleagues, who looked at negative pressures from
0 mmHg to -400 mmHg in 25 mmHg increments.
When they measured underlying blood flow with a Doppler, there was a bell-shaped curve response over a range of NPWT.
The maximal flow was four times the baseline and occurred with -125 mmHg pressure.
When the pressure was above -200 mmHg, blood flow began to decrease.

Indeed, a number of reported clinical studies have used NPWT with higher pressures than the recommended -125 mmHg with good
outcomes.
Jeschke and co-workers combined NPWT with fibrin glue in order to hasten the take of Integra (Integra Life Sciences).
The study found NPWT with pressure of -150 mmHg reduced the take period from an average of 24 days down to 10 days.
Meanwhile, the success rate of Integra increased from 78 to 98 percent.

- in another study from Eurpope using off the shelf dressings and wall suction from 2004, the authors noted excellent clinical results
in knee replacement patienets:
- study protocol involved an off the shelf closed suction dressing with pressure set at 400 mm Hg for the first 12 hours.
- it makes sense that they did not report blistering formation from these high settings because usually there is minimal aggressive
ROM during the first 12 hours after surgery;
- Suction dressings in total knee arthroplasty--an alternative to deep suction drainage.

5) Conclusions: What have we learned about improving patient care?

* compression dressings are bad for the staff (time consumming and do not allow the dressing to be visualized)
* compression dressings are bad for the patient (painful and interfere with PT)
* dressings that do not control bleeding and those that require repeated dressing changes (PICO at 80) may increase risk of infection.
* use of hospital wall suction has proven to be safe for general orthopaedic surigcal cases such as joint replacements.
* there are a variety of ways that the PICO tubing can be connected to wall suction;
* use of 150 mm Hg wall suction is expected to better control bleeding until POD 1, than lesser settings.
* pressure may be applied for longer time periods for patients with continued bleeding (eg. patients that are on plavix + lovenox)
* expectation that there will be less dressing changes (better for the nurses and the patient)
* CPM and aggressive PT ROM exercises should be minimized while the 150 mm settings are required.
* once it is clear that there is no active accummulation of bleeding on the PICO dressing, the battery unit can be applied.
* using hospital suction will allow for longer use of the PICO battery unit (it runs for only 7 days) which is beneficial during the
outpatient time period.
* with less bleeding, there may be potential for less blood tranfusion and earlier discharge (better for the hospital and the patient)