- Lateral View:
- AP view may not reveal initial slip, which explains need for a true lateral lateral which will detect a posteriorly directed slip;
- w/ an acute slip, a frog leg lateral may be contra-indicated since it can increase the slip;
- w/ a chronic slip (or w/ a child who has been walking), a frog leg lateral is acceptable;
- the most sensitive indicator of a mild slip is the loss of lateral overhang of the femoral epiphysis;
- Southwick Slip Angle:
- head-shaft angle of the affected side is subtracted from the head-shaft angle of the normal side;
- the normal head shaft angle is 12 deg;

- Classification:
- Grade I: displacement of epiphysis less than 30% of width of femoral neck;
- Grade II: slip between 30%-60%;
- Grade III: includes slips of greater than 60% the width of neck;

- Chondrolysis:
- is seen as a progressive irregularity of subcondral bone & rarefaction of both the acetabulum & femoral head;
- initial pre-treatment radiographs may show loss of cartilaginous space (as compared to the other side); 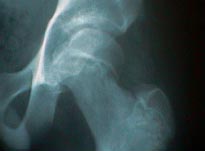