- Discussion:
- a developmental dysplasia of peripheral growth plate which forms a cartilage capped projection of bone found near metaphyses of long bones;
- peripheral chondroblast grows outward from the metaphysis, acting as an ectopic growth plate, which ceases growth at skeletal maturation;
- hence, there is an excrescene of trabecular bone capped by a thin zone of proliferating cartilage;
- it is the most common benign bone tumor;
- usually occurs in long bones, but may occur any bone that is preformed in cartilage;
- diff dx:
- multiple cartilaginous exostoses;
- patients have polyostotic tumors
- look for short stature, clubbing of radius, & angular deformity of the lower limbs;
- these patients have an increased risk for secondary chondrosarcoma after the age of 30 years;
- parosteal osteosarcoma
- may present as a symptomatic "exostosis" that increases in size in adults;
- tumor growth:
- lesion growths by enchondral ossification of proliferating cartilage cells in its cap;
- tumor will continue to enlarge during skeletal growth, but will become latent at skeletal maturity;
- however, the lesion may continue to grow into the 3rd decade;
- occcassionally a lesion grows more rapidly than expected;
- most common locations are proximal or distal femur, proximal humerus, proximal tibia, pelvis, and scapula;
- in areas other than the knee, more likely to undergoe malignant degeneration;
- may occur in the spine and cause neurologic damage;
- malignant transformation:
- risk of sarcomatous transformation in solitary exostosis is about 1%, but in MHE, risk approaches 10%;
- evidence for transformation: (to chondrosarcoma)
- cartilaginous cap thicker than 1 cm in an adult (in child may be 2-3 cm thick) as seen by MRI;
- sudden or marked increase in uptake on bone scan in an adult (inconsistent w/ normal latency seen w/ skeletal maturity);
- confirmation by CT or MRI imaging of a soft tissue mass or displacement of a major neurovascular bundle;

- Clinical Presentation:
- look for a firm, nontender, immovable mass arising near end of the long bone;
- a symptomatic lesion, may be caused by irritation of overlying soft tissues which may go on to form a fluid filled bursa;
- bursal fluid may be mistaken for a soft tissue mass; 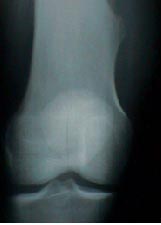 - Diagnostic studies:
- x-ray appearance of an exostosis is either flat, sessile lesion or a peduculated (stalk like) process;
- peduncultaed osteochondromas are oriented in proximal direction;
- x-ray hallmark is blending of tumor into underlying metaphysis;
- look for a well defined metaphyseal excrescence of bone w/ a mottled density;
- calcification:
- cartilaginous cap displays irregular areas of calcification;
- amount of calcification and bone formation increase w/ age;
- Microscopic Exam:
- on microscopic exam, cartilaginous cap is seen to have same pattern as normal growth plate but it will be less organized;
- underlying trabeculae form by endochondral ossification of cap and contain central cores of calcified cartilage.

- may uniform but expanded cartilage cells w/ small round or elongated nuclei which may be positioned in rows similar to a physis;
- polymorphy and hyperchomasy of cartilage cells is an expected finding in young children;
- note that the cartilagenous cap may be upto 1 cm in width in adolescence and that a cap greater than 3 cm is consistent w/ low grade chondrosarcoma;

- Treatment:
- no treatment is required if the diagnosis is not in doubt and if the patient is relatively asymptomatic;
- surgical resection is indicated for persistant irritation (from bursitis) or for neurovascular comprimise;
- surgical resection is also indicated for continued osteochondroma growth after skeletal maturity (in which case malignancy is suspected);
- definitive treatment includes marginal excision of an active exostosis,  including the cartilaginous cap & overlying perichondrium;
- deep bony base has minimal activity and may be removed piecemeal.
- the cartilaginous cap should not be traumatized during its removal;
- prognosis for a solitary exostosis is excellent (< 5% recurrence following marginal excision)


Pseudoaneurysm of the popliteal artery with an unusual arteriographic presentation. A case report.